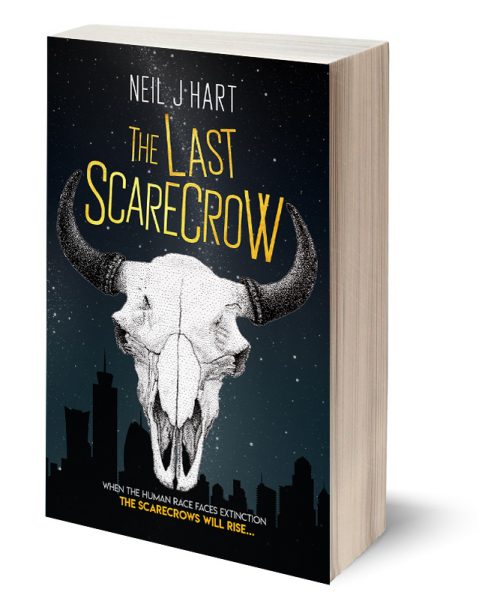 When the human race faces extinction…
…the Scarecrows will rise.

Erin liked to build Scarecrows. Her father taught her how. But he’s dead now. Everyone is dead. The Many Years Storm saw to that.

After the storm, a scarecrow named Twelve slowly comes to life on her weather-beaten cross. Sea levels have risen, only scarce pockets of land remain. For the most part, it’s quiet. The rhythm of the sea is all Twelve can hear. That, and the sound of a thousand dead bodies washing up against the shore.

Twelve is seven-foot tall and had a bison’s skull for a head. She wears a scarlet pirates jacket, a dress the colour of midnight and cement-filled boots. But Twelve isn’t alone. A morbid blackbird called Raven explains about The Many Years Storm and the eleven other scarecrows that once lived on the same farm. Twelve decides she must find her lost siblings, but before she can put together a plan, a strange, wild-looking girl appears claiming to be her creator. Somehow, Erin is still alive.

The Last Scarecrow is a middle-grade (9-12+) post-apocalyptic, fantasy / horror / adventure book. Some scenes / themes may frighten younger children and nervous adults. If you’re a fan of L. Frank Baum’s Wizard of Oz and Return to Oz, the Harry Potter books, Abi Elphinstone’s Dreamsnatcher Series, J.M. Barrie’s Peter Pan, then I’m sure you’ll delight in sailing across the Endless Blue with Twelve, Erin and Raven. Climb aboard, the adventure is just beginning.