FREE Extract: The Woman Who Labelled Everything 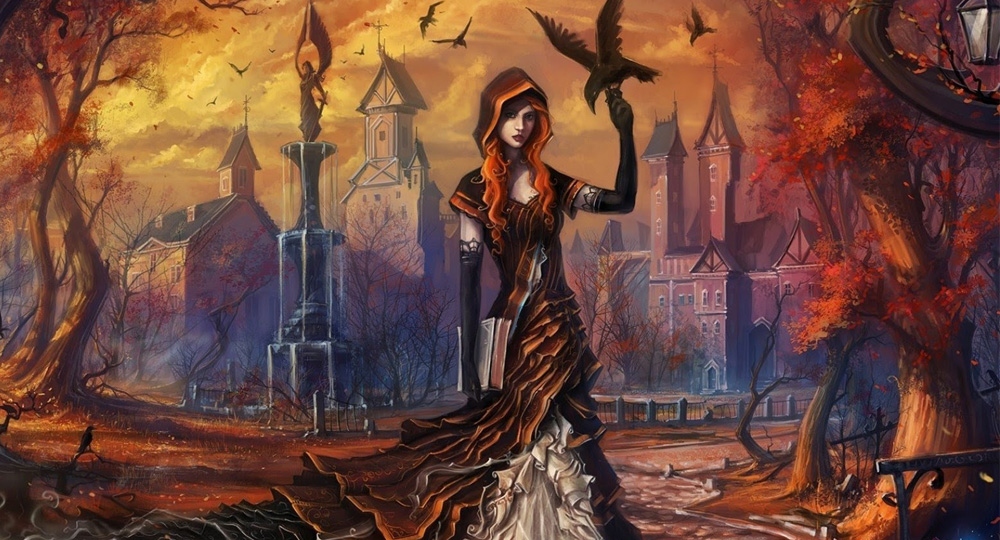 In a majestic house, on an immaculate street, opposite the Royal Park in Ville de Feuilles— the City of Leaves— lived a wealthy woman named Estelle Gautreau.

Her house was split over five floors and filled to the rafters with books, paintings, ornaments and antiques; glamorous clothing and costumes, jewellery, shoes and wigs; flawless wooden furniture, couches, armchairs and chaise longues; tiny silver thimbles, spoons, pill coffers, snuff boxes and cigarette cases; and every type of possession and collectable that you care to mention.

Sitting in her house, staring at her belongings every day, made Estelle happy beyond all imagining— but a sadness lingered in her heart. Something was missing; something that she coveted more than anything else in the world.

Now, the City of Leaves is famous throughout Norland for its new years celebrations. One year, the Royal Park opposite Estelle Gautreau’s house was chosen to hold the new years festivities. She watched with fevered anticipation as the carnival arrived and an army of roustabouts worked tirelessly rigging a sea of tents and a cavalcade of fairground attractions.

When new years eve arrived, Estelle dressed in her finest clothes and crossed the street to the carnival. She wandered through the makeshift avenues of tents and pop-up eateries, their sounds and smells filling her with childhood wonder. She sampled whiskey-glazed pork skewers; toffee-flavoured tea, coated with fluffy cream and chocolate flakes; fried potatoes dripping with cheeses from all over the world; and, to her astonishment, found herself standing outside a fortune-tellers tent seriously considering whether she should enter.

Estelle was a cautious woman, not one to be taken by the frivolous notions as fate and destiny, but was soon sat in the candlelit tent with a strange man’s hands on hers.

“Why have you come?” he asked her.

“Nothing,” she replied. “I have everything that I want. More than I need.”

“Yet there is something missing,” he told her. “In your heart, Estelle. A longing. A need. Something that money cannot buy.”

The fortune-teller folded his hands beneath the table. “Do not be afraid. Speak from your heart.”

Estelle’s bottom lip quivered. “Love,” she said, finally. “I want to be loved.”

The fortune-teller stared at Estelle for a moment, taking a long, cool breath. “To find love— true love— you must let people into your life,” he told her. “Relinquish the hold on your material things. Collect memories and experiences, not possessions. Talk to every stranger. Accept every invitation. Live in a way that you have never lived before. Do this, and love can be yours.”

Estelle frowned. “Really? When? Where?”

The fortune-teller drifted into the shadows and the tent opened.

Estelle wandered back through the carnival, her head spinning with the words of the fortune-teller, the sights and sounds and smells that surrounded her barely registering. Her mind was on the future, on what she had to do.

In her house, Estelle walked through each room and admired all her belongings. She brushed the back of her hand against the furniture, ran her fingers over rugs and silver jewellery, smelt the polish and incense and the wealth in every room. Finally, at the stroke of midnight— as fireworks erupted in a storm of colour from the Royal Park— she hauled the bottom drawer of her armoire open and lifted out a nickel-plated Dymograph.

A Dymograph, if you didn’t already know, is a very compact typewriter. It prints words onto one side of a small strip of parchment and adds an adhesive to the reverse. She spent the entire night printing labels from the Dymograph and sticking them to everything around her. Item #00001: Bedside tables (pair). Mahogany, two drawers. Item #00002: Hand-forged, wrought-iron bed, double, brass bedknobs. Item #00003: Rug, Persian. And so on.

As she dymographed each item, she measured the height, width and depth and noted them in a large, leather-bound journal. She also took a pictogram of each item that she planned to add to the journal once she had developed them in her dark room. After many hours of typing and measuring and pictography and scribbling, Estelle had done her entire bedroom. Six hundred and fifty-eight items were dymographed, measured, pictographed and listed.

Estelle spent the following thirty days and thirty nights dymographing, measuring, pictographing and listing every item in her house. In total she dymographed and recorded seventy-four thousand, eight-hundred and forty-three items which included everything from a oak dining table made to seat twenty to the tiniest pair of silver sugar tongs.

As the final item— the Dymograph itself— was recorded, Estelle collapsed onto her bed and slept for several days. She woke to the face of a man leaning over her, shaking her gently by the shoulders.

“Madame?” he said, relief edging his words. He was dressed in the official pine green of the City of Leaves Police Force. “For a minute there I thought you were dead.”

“Dead?” she replied, sitting up.

“You haven’t been seen for days,” he told her. “People have been worried.”

Estelle swung her legs off the bed and sunk them into the soft rug at her feet. “People?” she said. “What people? I have no—” The word friends stuck in her throat. “Who are you?”

“Officer Leroux. August Leroux,” he told her. “Madame? Do you feel alright?”

August nodded. “You have a fantastic home,” he said, looking around.

“Thank you,” she replied. “It’s been my life’s work. I wouldn’t change it for the world.” Estelle stopped, frozen. The last thirty days and nights descended into her mind’s eye. She looked at the bedside table. The Dymograph sat silently looking at her, the label curling around the side. “I have to get rid of it all.”

“What?” August said, confused. “Whatever for?”

Estelle thought of the fortune-teller. “I have so many things, but that is all I have. Collections, objects, possessions. That is all my life has become. A horde of treasures that I cannot take with me when I leave this world.”

“Most people would covet what you have,” he said. “You should enjoy them.”

Estelle nodded, but her face was sad. “I have. For many years. But now my possessions are bereft of any such enjoyment. The things I own have ended up owning me.”

And so, from that day on, Estelle Gautreau dragged her dining table out onto the cobbled street at midday and, for one hour, covered it with box after box of her worldly possessions. As people passed by, Estelle studied them and gave her treasured things to those she thought deserved them. Some people where unsure, confused by her actions, but soon they flocked to the house opposite the Royal Park to see if Estelle Gautreau would bestow one of her treasures upon them.

As the days passed, Officer Leroux returned to see Estelle. He stood and watched her as she gave away the things that she had spent her life collecting, refusing to take payment for any of them. As the last item for the day left the table, he approached Estelle and invited her for coffee, and then dinner, and then for numerous strolls in the Royal Park. In turn, Estelle invited him to watercolour classes, bookswaps, a steamboat trip down the Blackbrook beneath the withering trees and the white painted bridges of Le Tigre.

And, as sure as summer follows spring, Estelle and August were wed in the Royal Park opposite her house and news of a baby shortly followed. Throughout her pregnancy, Estelle continued to distribute her possessions, one at a time, to the people gathered outside her house at midday. She refused to take a day off, even when August begged her, fearing that she looked pale and exhausted. Her addiction to ridding herself of every last vestige of her previous life took precedent over everything else. With each item leaving her hands, she felt lighter, transforming, becoming who she was meant to be.

Estelle drove forward, day after day, until she had nothing but a single box remaining. It contained a pair of bronze cat bookends, a handful of small framed paintings, a jar of mixed buttons, and the Dymograph itself. Before she was able to head out onto the street and free herself of her last possessions, her child sprang forth into the world.

Estelle gave birth to a baby girl in the hallway of her enormous house with August and a group of nurses surrounding her. The following day she took her daughter out onto the street and lay her in her basket on the dining table. Estelle relinquished the bronze bookends to an old man in a grey suit, the paintings to a young couple that seemed hopelessly in love, and the jar of buttons to a group of children who were playing in the park. The dining table itself, over which every item had been passed and lives were changed forever, was taken by the local museum and heralded as an icon of modern culture.

Estelle took the Dymograph and the leather-bound journal— that was bursting at the seams with thousands of listings and pictograms— out of the box and placed them on the cobbles, her hands shaking nervously over them.

Nodding, he left Estelle on the street and disappeared into the huge empty house. The afternoon passed slowly and Estelle did not return as usual. Eventually, August went in search of his wife and found her sitting on a bench in the middle of the Royal Park. He smiled with relief as she came into view, cradling their daughter in her arms.

But, as he approached, his relief soon turned to terror, for what she was holding was not their daughter at all. “What have you done?” he said.

Estelle was staring off into the distance, the wind gently caressing her hair.

“What are you doing with that?” he asked, pointing, his voice catching in his throat. “Where’s our daughter?”

“I couldn’t do it,” she said slowly, looking up at her panic-stricken husband. Her eyes drifted down to the object that rested in her lap: the leather-bound journal that contained the listings and pictograms of all the things she had once owned. “I’ve taken them all back.” Her eyes thinned, her fingers grasped the soft leather as her voice rasped a desperate whisper, “They’re mine!”

August’s heart sank. He wrestled the journal from his deranged wife and rifled through the pages. As Estelle tried desperately to retrieve the journal, he ran his trembling finger down the last page of the manuscript. He flashed past the bookends, the paintings, the jar of buttons, the dining table, and then he read—