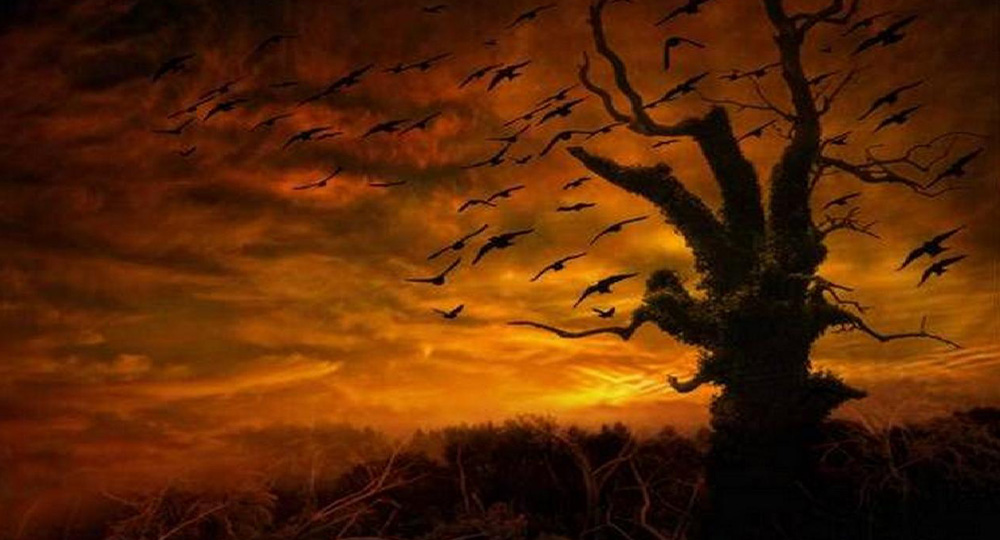 It was nigh on two thousand years ago that the legend of The Witch Tree began. To hear it, we must travel a great distance, through time and space.

Over the River Myr we must fly, leaving the safety of Iron Bridge behind. We must skim the western treetops of Darachna Forest, then up and over the Black Mountains. The sharp stone and rock of the mountains spreads out beneath us for hundreds of miles with holdfasts and crumbling castles perched on cliff tops and rooted in valleys. Beyond the mountains we fly, across the Snake Plains, towards the distant Western Waters. And here, at the very edge of the world, lies the mighty circular cities of San Cristophe.

Somewhere in the swirling sand and withering heat, outside the walls of San Cristophe, stood three Sisters: dressed in black, bound in iron.

The first, no older than sixteen, shielded her vivid blue eyes from the sun and sand. The second grunted listlessly, digging her work-worn hands into her wide hips. The third raised her gnarled head towards the battlements, muttering incantations and the ancient Words of Shadow.

Now, they weren’t sisters in the way you and I think of sisters, for they were not of the same mother, but they were of another, more terrible, Sisterhood: the Sisterhood of Witches.

The King looked down on the three women draped in black. From his vantage point, they looked like harmless desert beetles; beetles that he could crush beneath the heel of his boot. But they were far from harmless and, even at this distance, he did not feel the least bit safe.

“Harridans!” he bellowed, his voice vanishing into the desert forever. “Your time is at an end. San Cristophe is a city of peace and justice; of learning and knowledge; of truth and honesty. A city built for all time. It has no place for your magics and sorcery, your malcontent, your Words of Shadow.”

The old witch, hearing the words of the King, spat on the ground in disgust. Her spittle sizzled, smoked, then spawned hundreds of black scorpions that wriggled and fought and melted into a steaming tar at her feet.

“Death?” said the Archdeacon. “Do you really think that death will be the end for these women? They’re witches, sire. Harridans, sorceresses and necromancers. Their power is beyond anything that death can contain. They are death; unforgiving, unforgetting and forever.”

The Kings’ Golden Warriors took the three witches one thousand paces south of the city and ended their mortal lives. They dug a communal grave by the side of the Kingsroad and placed them side-by-side in the ground. Their bodies were then burned in camphor oil, the bones covered in soil and sand and salt. The Archdeacon was brought up to the grave to give a short benediction but no marker, cross or headstone was erected and, after the wind had worked its magic, no trace remained at all.

A full moon rose into the sky that night above the city of San Cristophe. It cast a brilliant light across the Snake Plains, turning them into a slithering pale blue sea of dust and sand. The stars seemed diminished, as though they were afraid to show themselves. The King stared across the city, towards the gate where he had condemned the three witches, and said a prayer to the night gods before retiring to bed.

But his prayers went unanswered.

Across the city, beyond the mighty walls and the Kings Gate, one thousand paces south upon the Snake Plains, beneath the light of the moon, the ground stirred.

A shoot sprang from the desiccated earth; a black shoot that writhed and flicked like an earthworm. Within minutes the shoot broke into two, and then four, and then eight, and stretched up towards the sky, growing and building and spreading until it became a small tree with twisted branches and gnarled bark, black as night. The tree grew until it was more than thirty feet high, swaying gently in the night air.

The King was alerted by the cries of his advisors. He, accompanied by his Golden Warriors, advisors, clerics and men-at-arms, was taken, in the dead of night, to the site of the black tree. On seeing the abomination, the King’s face turned paler than a fish’s belly.

“I warned you about the witches,” cried the Archdeacon, as the King arrived. “I knew that no good would come of killing them. I warned you and now look what has happened!”

The King considered the tree for a time. Ignoring the cries of his Archdeacon, he turned to his Golden Warriors. “Cut it down. Immediately!”

The tree moved then. The black branches shifted, planting themselves in the ground around the trunk. The Golden Warriors approached tentatively, for the tree had started to groan and creak and wail like an injured beast. They drew their longswords. The blades glistened, razor-sharp, but every time they approached, the branches lashed out, knocking the Golden Warriors across the sand. Again and again they attacked, but the tree pushed them away with a sense of mild indifference.

The King, growing tired of the efforts of his Golden Warriors, took up his Moonblade Axe and approached the Witch Tree. To his surprise, the branches retracted from the sand and let the King pass beneath. It was only once he was stood next to the huge blackened trunk, his axe arcing through the air, did the branches reach down and seized the King.

He went reeling into the air, screaming and yelping as the branches tightened around his waist like the coils of a deadly serpent.

The tree pulled the King close. The faces of the three witches appeared before him in the burnt bark, knotted and angry. They watched him thoughtfully for a moment, as he squirmed in pain, before laughing darkly.

“Foolish man,” chuckled the Maid. “You are no match for us.”

“Even in death, we are more powerful than you can imagine,” said the Mother.

“And now it’s time for you to join us,” laughed the Crone, dry and sickly.

The King was suspended above the tree, a branch around each limb. A fifth branch swirled overhead, moving viscously from side to side. It whipped forward, coiling itself around the King’s neck, killing him stone dead.

But that wasn’t the end for the King. His body hung limp and loose in the branches, the witches muttering and chittering inside the bark. A grey cloud of smoke rose from the trunk of the tree, as if it were on fire. The smoke crackled and fizzed, arrows of blue and white light shot into the night, sparks dropping to the sand like dying fireflies. The King’s soul was ripped from his body, smothered in smoke, and dragged down into the tree.

As the smoke vanished, the King’s body landed cruelly on the sand. The Archdeacon moved forward to help his King, but there was nothing he could do. As he sat there weeping, he could have sworn that he heard his King’s smothered voice, wailing in the distance.

He turned and looked at the tree, and there, in the bark was the grinning face of the three witches. But, most horrible of all, between their wretched faces was that of the King, etched in the black bark of the Witch Tree. His eyes were terrified, wide and screaming. He opened his mouth to call out but thirty long, wicked fingers reached over his face and dragged him deep into the roots of the tree.

Following the King’s death, a sandstone tower was built around the tree and engulfed by the expanding city. It is now guarded by descendants of the Golden Warriors. Its true location is an ancient mystery. But, they say, if you’re able to find the Witch Tree at San Cristophe, and you’re able to get close enough, you can hear the screams of the King from inside, begging for forgiveness.