Alan Partridge meets the League of Gentlemen. Directed by Edgar Wright and a young George Lucas. 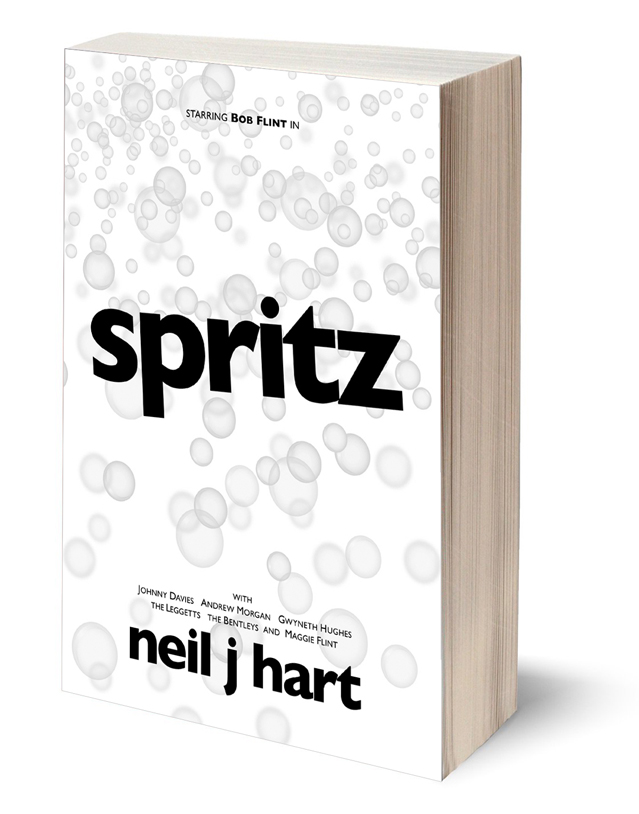 Follow Bob Flint on his path to glory through the rain-beaten streets of Swansea, South Wales.

Beneath the facade of habitual drinking and procrastination lies the soul of man who is dying for acceptance, free beer, and better dance moves.

Spritz is a black comedy, a cocktail of soap opera desperation and Hollywood dreams. A world somewhere between the TV and the sofa. Floating. Confused.

“Highly imaginative, and very much of our time, here is a book to delight with its wit and startling humour – which sometimes speaks of darker things. Great characterisation, too, revealed within charmingly fantastic episodes, which include some touching quirks of fate.”
Tillet Press

“This is the funniest book I have read in a long while… Spritz offers a cocktail of pathos and humour that keeps you guessing to the end. I look forward to Neil’s next novel.”
Janine Pulford, Author Aggracore

“I never thought something set in Swansea could be so amusing, but Neil J Hart proved me wrong. The characters are so well crafted that you somehow find yourself believing in them despite the ludicrous situations they seem to find themselves in. The plot twists are unexpected and help create a nice contrast between comedy and drama.”
Louise, amazon.co.uk

“Spritz is an accomplished debut novel rich in great charactersations. The beautifully drawn cast are especially effective because the dialogue is so convincingly realistic, even though they are in the midst of a compelling, yet crazy, plot line. The pull of the story is irresistible, very dark and sometimes shocking – and yet wildly comical. I recommend this novel to anyone seeking something different, dark and very, very funny.”
Joyful Productions

“Although Bob Flint is the main focus of this novel, it is all the other characters and the intertwining of their lives that make this an unmissable read. Equal parts comedy and heartbreak, Neil J Hart ensures that we can see a bit of ourselves, or those we know, in his fantastic observations of people’s characteristics and idiosyncrasies. This is what allows the reader to relate to the plights of the cast of Spritz. You just want to keep reading just to see where it’ll all go, and you won’t be disappointed!”
Martin, amazon.co.uk

“Bob Flint is a sorry character and at first pretty charmless but as the story unfolds he is ultimately a romantic hero. Neil J Hart glides effortlessly through the twists and turns of this hapless chap’s life with humour and senstivitity. There are laugh out loud moments mixed with heartbreak which leaves you feeling emotionally satisfied. I recommend this book to anyone.”
Julia, amazon.co.uk